Upward trend at the second day of the Limburg Foal Auction

After a good average price of 8,000 euros yesterday, today the second group of foals could even exceed it in the online Limburg Foal Auction. Two foals exchanged owners for 15,500 and once again the international interest turned out to be great for the promising jumping foals. 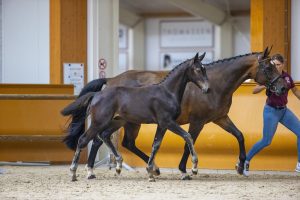 Buyers from South Africa, America, Germany, Finland, Belgium, Ireland, Sweden and England did great investments on this second auction day. The 27 foals achieved an average price of € 8,266, of which six foals were sold for more than € 10,000. The Catoki son Utoki of the Paddocks, bred by Anthony Mornie out of the three-quarter sister of Clinton, is sold to the United States for the top price of € 15,500, and for the same amount exchanged Palermo (Tokyo du Soleil x Clinton, breeder Lucy Meulenberg ) from Dutch owners. The granddaughter of the Grand Prix mare Minka’s Diamond, Powerfly Minka (s.Chacfly PS, breeder Van de Rijt) was also sold for more than € 15,000 and leaves for Finland. The striking Untouchable colt Pearl Touch Molga K (ds.Ultimo, breeder H. Kuijken) will have his future in Great Britain for € 14,500.

Promising
“We are absolutely satisfied with the progress of the auction tonight. We had a very diverse group of foals and there appeared to be a good interest in them. There are certainly a couple of fillies that are valuable for sport and breeding, and colts that we expect to see in the stallion selections in the future”, Paul Hendrix responds. “In two days we were able to achieve an average price of more than 8,100 euros and with that we can already conclude, even with another day to go, that this new set-up has been successful. It was a forced decision to go for an online auction this year, so we are glad that we have once again succeeded in reaching an international buyer network with this promising collection. That also gives confidence for the last group of foals. The auction will end for them tomorrow night and the bids are steady. So with a bit of luck, we can also keep this average price tomorrow.”