Two days after the very successful live auction at the Peelbergen Equestrian Centre, forty foals exchanged owners via the online edition of the Limburg Foal Auction. This resulted in a success, because the average price was € 8,600 and with that the auction has made a big step forward. With a price of €20,000, the Emerald van ‘t Ruytershof son Stormchaser V was the best seller. 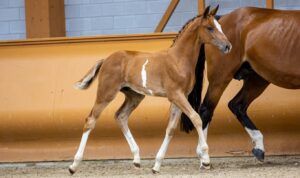 There was a lot of interest in the carefully selected foals. The biddings for the powerful colt Stormchaser V (s.Emerald van ’t Ruytershof) were mainly coming from Irish and American clients, and the latter have won. A nice amount was also paid for the promising Dark of the Moon (s.Dominator Z), this filly is sold to Great Britain for €19,500. The genetically interesting colt Charlie 707 Z (s.Cornet Obolensky) has acquired Irish owners for €17,000 and the well-bred Warentina van ‘t Goolder (s.Zirocco Blue VDL) is leaving for Canada for €14,500. Other foals have been sold to clients from Hungary, Belgium and Germany, among others. “We have seen around us that online auctioning is a good way to sell foals. This year we have been able to make a big step in terms of results and have achieved an average price of more than 2,000 euros more than last year. There was a lot of interest in the foals and in this way we were able to conclude a wonderful week”, says Paul Hendrix. Last year, the 30 foals in the online auction fetched an average of €6,500, now with 40 foals that has raised to €8,600.