Foals bred out of Grand Prix mares, dams of approved stallions and prominent damlines. The 20th collection of the Limburg Foal Auction is one that riders, owners and breeders will be very excited about. On Wednesday the 29th of September this promising collection will be auctioned live at the Peelbergen Equestrian Center and the foals can now be found on the website. 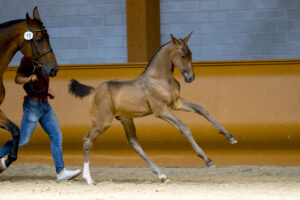 Over the past twenty years, the Limburg Foal Auction has built up an excellent reputation and this year the selection committee has once again been able to put together a striking collection. Most of the foals are coming from the strong breeding area around Limburg. The committee consisting of Paul Hendrix, Cor Loeffen, Stan Creemers and newcomer Michel Hendrix has succeeded in selecting a high-quality collection, with first-class performance genes.