The in 2009 at the Limburg Foal Auction sold El Primero was able to add another important achievement to his record. Under Victoria Colvin, the outstanding Numero Uno son jumped to the victory in the International Hunter Derby at CSIO4* Wellington. 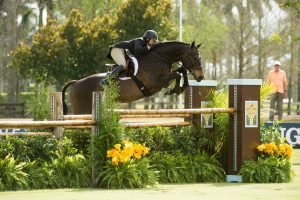 El Primero (Numero Uno x Indorado) was bred by Peter Goertz and was purchased by Stal Hendrix and Peter Francken at the Limburg Foal Auction. Three years later he was approved for the KWPN studbook with 82.5 points and in the end of 2014 he was sold to America to continue his career as a hunter. He has proven to be a top class hunter several times.

Top hunter
The 10yo El Primero is owned by Meralex Farm and is perfectly ridden by Victoria Colvin. They were the last to ride based on their leading performance in Saturday’s Classic Round. With Saturday’s scores combined with Sunday’s handy points, plus credit for jumping the high options, the duo amassed an overall score of 378.75. “El Primero jumped better than ever. He jumped so high at the first jump that I was waiting for him to come down”, says the lucky winner Victoria about the great-grandson of the Grand Prix-mare Especiale. “It all worked out very well.”