Two references of the Limburg Foal Auction have performed well at the first day of the KWPN Stallion Show. Both the Cornet Obolensky son Corvette Z.G. Z as the striking Hermantico son Our Prince TR passed the second round viewing today. This means that both LFA references can prove themselves in the performance test. 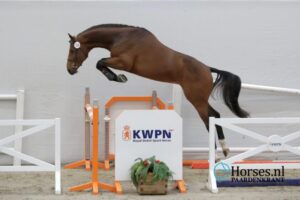 Stal Hendrix and Peter Francken purchased the interesting Cornet Obolensky son Corvette ZG Z (ds.Diamant de Semilly, breeder Wim Zegers from Reek, pictured) together at the Limburg Foal Auction in 2019. In the first and second round, this stallion made an impression with his reflexes and athletic scope. After these two excellent performances, Corvette ZG Z got his invitation for the KWPN performance test. That might going to be a reunion with Herman Seiger’s Our Prince TR (Hermantico x Chin Chin, breeder A.M. Reuzenaar from Schaijk), which was auctioned in the same year. This handsome stallion made a positive impression with his reflexes and jumping technique.