The striking Glock’s Toto Jr. son Maxim-N, who was sold at the Limburg Foal Auction in 2017, recently earned the breeding license at the Oldenburger studbook. As a foal this stallion bred by P. Nijssen showed his outstanding movements and now he ensures that he can be used for breeding. 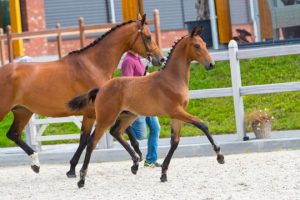 The Glock’s Toto Jr. son Maxim-N is bred out of the Johnson mare Helina-N, and comes out of a dam line that has also produced the Small Tour dressage horses Emerald (s.Wynton) and Casimir (s.Jazz). At the 2017 auction he was the most expensive dressage foal with a price of 23,000 euros. In the auction at Equestrian Centre De Peelbergen he came into the hands of Gestüt Gut Neuenhof, and these owners from Germany successfully introduced him to the Oldenburger stallion approval.