LVV Horse of the Year: Ermindo-W

Twelve years after Ermindo-W was sold in the Limburg Foal Auction, he performed at the European Championship in Riesenbeck last summer. Under Rolf-Göran Bengtsson, the breeding product of Kees de Wit has developed into a top showjumper and together they also went to the Olympic Games, where they were delegated as reserve combination. This ambassador is being honored as Horse of the Year today. 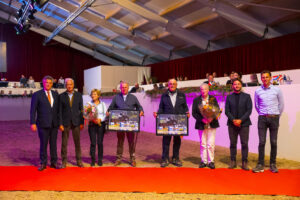 Under Rolf-Göran Bengtsson, the Singapore son has proven his value for the Swedish team many times. They finished in the Nations Cup competition in Rotterdam with an outstanding 0/1 result and last summer they finished third in the 1.55/1.60m class at CSI5* Stockholm City. They achieved victories in the Grand Prix of Opglabbeek and Westergellersen, among others. The impressive stallion with his recognizable blaze thus proved to be an ambassador for the Limburg Foal Auction at the very highest level and is yesterday highlighted as horse of the year 2021. This Ermindo-W, bred by Kees de Wit, was bought as a foal by Jos Frencken. Both the breeder and buyer were involved in the ceremony during the auction.