After an one year break from international competitions, the Limburg Foal Auction ambassador Van Gogh proved to be back in business. Together with his rider Marco Kutscher he won the 1.45m class at CSI4*-W Poznan last weekend. 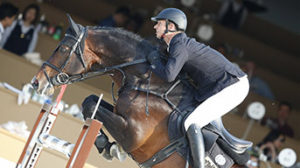 The Numero Uno son Van Gogh (ds.Bernstein), bred by Peter and Renate Stultiëns from Weert (NL), was sold at the Limburg Foal Auction in 2002. He made his mark in both sports and breeding and has thus often proved to be an excellent reference for the auction. In Poznan the successful pair, which has already won several highly awarded classes and Grand Prix, beated eight combinations in the jump-off of the Medium Tour class.