Lardeaux to the KWPN Stallion Show

At the end of this month it’s time for the KWPN Stallion Show in Den Bosch. One of the prominent parts of world’s biggest stallion show is the second round viewing for dressage stallions on Friday the 1st and Saturday the 2nd of February. The in 2016 at the Limburg Foal Auction sold Lardeaux will be one of the competitors. 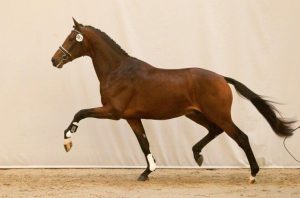 The son of Ferdeaux was bred by J. Deenen from Heijen out of the ster PROK-mare Dalia Delin (s.Wynton), who was elected as champion of Limburg in 2011. Nico Witte and Paardencentrum De Dalhoeve presented him successfully in the first round viewing of the KWPN in Ermelo. The selection committee selected the promising Lardeaux, who is bred out of the same family as the NRPS-approved Small Tour stallion Crosby, to go the next selection round in Den Bosch. Best of luck for the breeder and owners!