Two days after the traditional auction in the Peelbergen Equestrian Center, another thirty foals were sold in an online edition of the Limburg Foal Auction. Here too, it were mainly clients from abroad who invested in the foals and for €10,500 the Carrico daughter Candy Girl G Z will leave for United States as the most expensive foal. 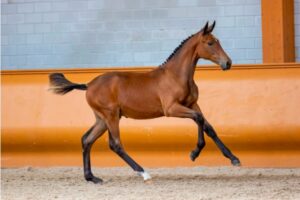 The thirty foals resulted in an average selling price of €6,500. Top seller Candy Girl G Z (Carrico x Marome NW, bred by Mieke Zoetelief out of a half-sister of Henrik von Eckermann’s very successful Glamour Girl) is purchased by Emile Spadone. Other foals have found new owners from Sweden, Switzerland, Great Britain, Hungary, France, Ireland and Germany. Just like in the live auction last Wednesday, almost all foals have found a new owner and most of them will leave the Netherlands. As a result, more than a hundred interesting jumping foals were sold through the Limburg Foal Auction in 2021.