In 2012 the striking Plot Blue-son Henkie-Penkie was one of the top foals of the Limburg Foal Auction. On top of a great season, he ended up second in the Dutch championship for five year old showjumpers this weekend.

Pieter Keunen is riding Henkie-Penkie for his owners Stal Hendrix and Peter Francken. This very promising Plot Blue offspring is bred by P. Verberne from Sint-Oedenrode and showed a lot of potential in the Dutch championship/Blom Cup. He jumped clear in every round and redoubled his efforts in the jump-off of the final, in which he was fast and clear once again. Pieter and Henkie-Penkie ended up second, in a championship that started with nearly 140 competitors.

Henkie-Penkie will be auctioned for the second time in his life on September the 26th. He is one of the top talents of the Dutch Sport Horse Sales collection. With his new name Hello Blue the DSHS offers the chance to buy one of the best young showjumpers of the Netherlands. 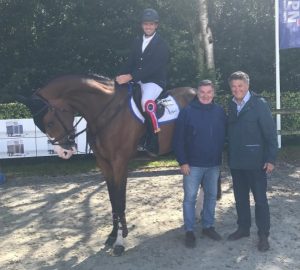