Now that the international competitions are on the rise again, a horse sold through the Limburg Foal Auction has immediately claimed an impressive Grand Prix victory. Under Rolf-Göran Bengtsson, Ermindo W (s.Singapore) took the victory in the Grand Prix of Westergellersen. 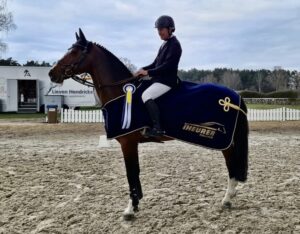 The in 2009 born and sold Ermindo W (Singapore x Carinjo), bred by Kees de Wit, has been a combination with top rider Rolf-Göran Bengtsson for several years now. The pair has already triumphed in the Grand Prix of CSI2* Opglabbeek last October, while in February this year they finished second in the Grand Prix at the same locatiob. In the German Westergellersen they beat eight competitors in the jump-off last weekend. They were almost two seconds faster than the runner-up combination. Well done!