Last month, Ben Maher delivered a top performance with the in 2011 in the Limburg Foal Auction sold Ginger-Blue, by winning the 4* Grand Prix of Valkenswaard. Last weekend the duo proved that they can also win a 5* Grand Prix. In Paris, they took the win by remaining the only double clear in the main class of the Global Champions Tour. 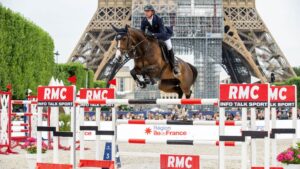 This means that the Plot Blue mare Ginger-Blue (ds.Royal Bravour), bred by Piet Verberne from Sint-Oedenrode, is developing into an excellent Grand Prix winner. In addition to these two prominent Grand Prix, they also won the 1.50m class at CSI3* Wellington this year. The now ten-year-old KWPN mare has been combined with top rider Ben Maher, who rides her for owner Jane Forbes Clark, since the autumn of 2018. “It feels incredible, it has been a great day here and it was a really hard Grand Prix, one of the hardest I’ve jumped recently. It is always great here with the crowd in Paris. Ginger-Blue really fought hard for me in the first round, she is a naturally fast horse so I rode the jump-off without too many risks to put pressure on the other two.”