El Primero is National Horse of the Year

Multiple Hunter Derby winner El Primero has been elected National Horse of the Year 2019 in the United States! It’s another nice achievement for the KWPN-approved Numero Uno son, who was sold ten years ago in the Limburg Foal Auction. 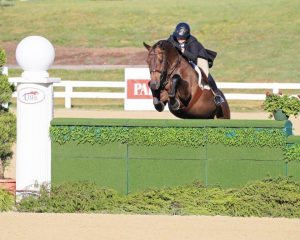 The Dutch bred El Primero (Numero Uno x Indorado, breeder Peter Goertz) was purchased as a foal by Peter Francken and Stal Hendrix. As a three-year-old he earned the KWPN breeding license thanks to a good score of 82 points in the performance test and then he performed well in the young horse and stallion competitions under Pieter Keunen. Since the end of 2014, he has continued his sports career in the United States, where he has already claimed many victories and top placings as a hunter. Under Victoria Colvin he starred last year in the 2019 Platinum Performance/USHJA International Hunter Derby Championship in Kentucky, where they took the win by far. El Primero also came out as the winner in the Hunter Derby championships at the Winter Equestrian Festival and in the Deeridge Derby. He was previously successful with Sandy Ferrell and Louise Serio. “El Primero has always lived up to his name. His talent and easy way of going made him successful right away,” said Serio. “When you have an extraordinary horse and an extraordinary rider like Victoria Colvin, the magic happens. They’re beautiful to watch together”, said previous rider Louise Serio about the horse owned by the Baldwin and Meralex Farm family.