LUMMEN – Curiosity (Caretino x Cambridge, bred by Anton Vullers from Hedwigenkoog) won the international CSI3* 1.30m class during the third week of the Lummen Spring Tour. Curiosity was sold at the Limburg Foal Auction in 2009. The Belgian rider Sam Polleunis guided the 8-year-old gelding to the finish line and did that faster than the other 25 contestants.

The victory did not come as a complete surprise. The duo showed to be in good shape already two days earlier. They were then placed third in the same class. Sam then had to lose against his competitors Joris Vergauwen and his Foxy Lady (2nd place) and Matthias Hens and Jinte (1st place).

But he was able to beat everyone last Friday with a time of 36,71 seconds. Vergauwen was placed second with a time of 37,66 seconds. On third place, with 40,57 seconds, was Thomas de Wit with his Carisco mare Inette LVP. 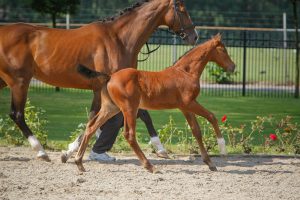 Curiosity (Caretino x Cambridge) as a foal in 2009. In the meantime on his way to a succesvol sports career under Sam Polleunis.