Las Vegas with 90 points approved for the KWPN

From 2020, dressage foals will no longer be auctioned at the Limburg Foal Auction, but references from the past continue to perform well. For example, the auction topper of 2016, is one to be proud of. The Ferdeaux son Las Vegas (a.k.a. Lardeaux) was approved for the KWPN studbook after scoring no less than 90 points in the performance test. 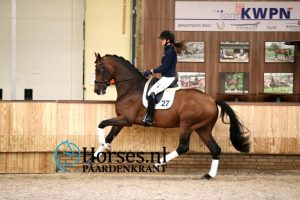 At the time, the breeding product of John and Lisette Deenen made a great impression at the Limburg Foal Auction on both the selection-, photo- and auction days. His current owners Nico Witte and Nol Gerritsen purchased the dressage talent for the top price of €45,000 and he appears to be fully worth this investment. At the KWPN Stallion Show, Las Vegas already showed its enormous potential and once under saddle he turned out to be a class of its own. The stallion committee of the KWPN also agrees with this because they gave Las Vegas 9.5s for his canter, posture & balance and rideability as well as 9s for the trot, suppleness and talent as a dressage horse. He won the performance test with an outstanding score of 90 points, which has only been given to a dressage stallion two times before. Breeder John Deenen was a proud witness of the KWPN approval of the Ferdeaux stallion: “It’s nice that Las Vegas was sold to real horseman at the Limburg Foal Auction and I hope they can keep him for the Netherlands. Because we as breeders hope to enjoy him a lot more!”