The Plot Blue mare Ginger-Blue, which was sold in the Limburg Foal Auction in 2011, has generated fantastic advertising. The 10 years old Dutch bred mare claimed the victiry this weekend in the Grand Prix of CSI4* Valkenswaard under Ben Maher. 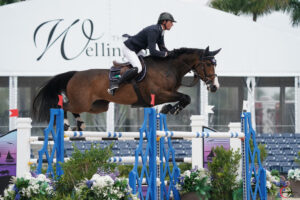 On Friday the duo got off to a good start and finished third in the 1.50/1.55m against the clock class. Ben Maher had his sights on Sunday’s Grand Prix with Ginger-Blue (Plot Blue x Royal Bravour, breeder P. Verberne from Sint-Oedenrode) and everything went according to plan. Eleven combinations qualified for the jump-off and Ben Maher remained in control of everyone with his ten-year-old future talent Ginger-Blue, which he has been riding since the autumn of 2018. In March this year they already won a 1.50m class at CSI3 * Wellington.

This year it is also possible to purchase future Grand Prix winners in the Limburg Foal Auction. Keep an eye on this website for the latest details!