Future talents for sale in the online Limburg Foal Auction

After a very successful 22nd edition of the traditional Limburg Foal Auction at the Peelbergen Equestrian Centre, the auction continues with an online edition. This carefully selected collection also contains jumping foals with a great future in sport and breeding. Until tonight it is possible to bid for offspring of stallions such as Emerald van ‘t Ruytershof, Cornet Obolensky, Diamant de Semilly and Casall. 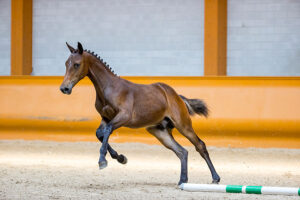 For more than twenty years, the Limburg Foal Auction has proved to be a valuable bridge between the breeders of high-quality foals, mainly from the breeding area around Limburg, and a large international buyers network. About forty interesting foals will exchange owners via this online edition tonight.

Quality foals
The collection is selected by Paul and Michel Hendrix, Cor Loeffen and Stan Creemers. Genetically very valuable foals are offered in this online collection. For example, the colt Charlie 707 Z (s.Cornet Obolensky) is a grandson of the well-known mare Ligie, who produced the international 1.60m showjumpers Tinka’s Hope, Show Show and Calimero of Colors. The Diamant de Semilly colt Style is a son of the internationally 1.50m level performing mare Cantate (s.Cantos) and the Cayetano Z colt Special Envoy is a grandson of the Grand Prix mare Charleen, who competed in the European Championship in 2003 with Mikael Forsten. Another future talent is the Van Gogh colt Spitfire, who is a half-brother of the international 1.60m level horses Big Brother (s.Untouchable) and Dustin (s.Ustinov). Also the damlines of Grand Prix showjumpers like Winchester HS (s.Numero Uno), Plot-Blue (s.Mr.Blue), Valentina van ‘t Heike (s.Nabab de Rêve), Nairobi (s.Larno) and Wieminka B (s.Cardento) are represented in this collection. “With our live auction we are really reaching our max at around eighty foals, which is why a number of the selected foals are included in this online auction. Our selection criteria are the same as for the live auction, so this collection offers an opportunity to make valuable investments in the future,” explains Paul Hendrix.

Via this link you can register as a bidder and here you can find the collection and conditions. The lots close on Friday the 30th of September from 7pm.